When Travis was born, he had jaundice really bad and ended up being hospitalized twice. We spent 7 of his first 10 nights of life in the hospital where I would feed him, change him and then put him right back in his bassinet under the bililights.

When I got home all I wanted to do was to hold and snuggle him. That led to him only sleeping in my arms during the day, which I didn't mind because I just wanted him near me all the time. At bed time I tried to put him in the co sleeper and he would cry and cry and cry, and Jon and I would get no sleep. So I pulled him into bed with us, sleeping with him in the crook of my arm where he would nurse until he fell asleep.

These things combined to create a child who would only sleep in mommy's arms or the swing and wanted to snack all day instead of eating a full meal. Some days he would fall asleep eating and then he would wake up a few minutes later acting like he was starving. Basically he was never satisfied with food or sleep.

We stayed with my sister Angie last month when we were in town for our sister Fish's wedding. I told her that I really wanted to get Travis on a schedule and she lent me the book Baby Wise by Gary Ezzo and Robert Bucknam . When we got home I went to find the book and it was no longer in my bag...turns out that Jon thought our 1 1/2 year old niece had put it there when she was playing in out stuff, so he put it back on the bookshelf.

When we were there for Christmas Eve I made sure that the book made it into my bag so that it would make it home with me.

Saturday evening I sat down and read the whole book. I was so excited to try it that I almost started right then. I thought about it some more and decided to wait until the next morning.

Sunday morning I got up and started the routine. I decided to start with a three hour cycle. Feed, wake time and then nap time.
Rinse and repeat.

Second nap time he screamed for the first part and then slept for a bit.

Third nap time he screamed, slept and then screamed.

That continued all day.

His last scheduled feeding was at 10pm. I fed him, changed him and put him down in the co sleeper where he cried until 1:45am. Every 15 minutes or so I would reach over and give him his pacifier and tell him it was nigh-night time. At 1:45 I decided to feed him. Afterall, he was going to need to keep up his strength if he was going to continue to cry like that. I put him back down at about 2:15, he fussed for a few minutes and then slept soundly until 7 this morning when I woke him up to eat.

I am so tired, but I am seeing promising results with him already...

First nap today he turned his head to the side and went right to sleep! Victory!

Second nap today he cried then slept and is now crying again. **sigh**

I just have to stand firm and give him some time to adjust. I think he is going to do well once he gets the hang of it, and if not, I will find another method that works for him.

I am just so thankful for all the great mommy friends who talked me through last night....even though I knew I was doing the right thing it helped tremendously to have the support of other mommies who have gone and are going through this with their kids.
Posted by Amy @ Increasingly Domestic at 12/28/2009 09:26:00 AM 2 comments:

Email ThisBlogThis!Share to TwitterShare to FacebookShare to Pinterest
Labels: Parenting, So Thankful, Travis 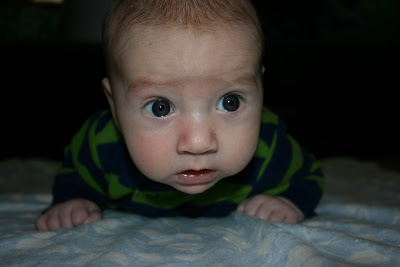 Hello big eyes! You are such a joy for your mama...
I love you so much. 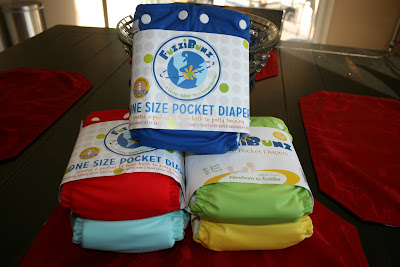 If you had told me a few years ago that I would be using cloth diapers, I would have laughed in your face!
My mom used cloth diapers and when I would change my siblings' diapers I would have to fold a rectangular piece of cloth just so around the baby and then try to pin the sides together while holding on to a wiggling baby. Then came the crinkly plastic cover that had to be slid up the legs and over the diaper.
That part wasn't all that bad once you got the hang of it...it was taking it off when there was a messy diaper that was tricky. The, uh, "solids" would smear down the legs when I would slide off the plastic diaper cover and it would take that much more time to clean up the baby before putting on another diaper.
It was not fun.
So when I had Brooklyn six and a half years ago, the thought never crossed my mind to use cloth diapers.
When I was pregnant with Travis I was online looking at all of the baby stuff that has changed since I had Brooklyn and I came across these amazing cloth diapers that were all one piece. No pins or plastic covers necessary! What?!?!? I was so amazed!
There are so many great options now and so many fun colors. I researched different brands and styles until I settled on the One-size Fuzzibunz cloth diapers. They have adjustable elastic strips in the legs and in the back of the diaper and there are multiple snaps on the front to allow you the perfect fit
no matter the size of your baby.
My main reason for wanting to use cloth diapers was the money it would save us, but once I put one on Travis, the look on his face gave me another one. He turned his head to the side and coo'd. Seriously.
Posted by Amy @ Increasingly Domestic at 12/22/2009 10:53:00 AM 8 comments: 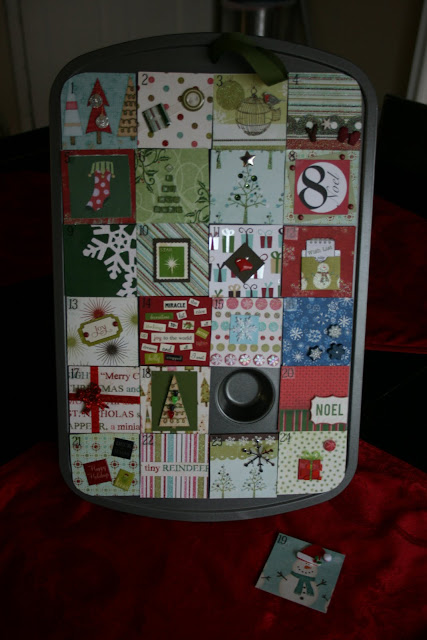 I got this in the mail and was so excited when I realized what it was! I saw one in a scrapbooking magazine and wanted to make it, but then i realized just how much work that would be.
Thank you Belle! We love it:)
Posted by Amy @ Increasingly Domestic at 12/19/2009 06:27:00 PM 4 comments:

I am so Blessed

These three are my love and my heart. 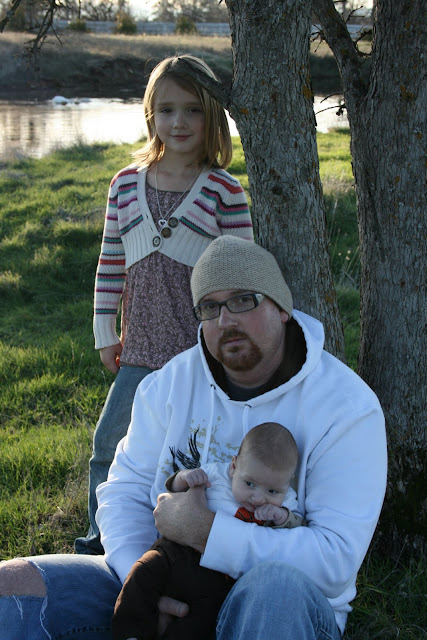 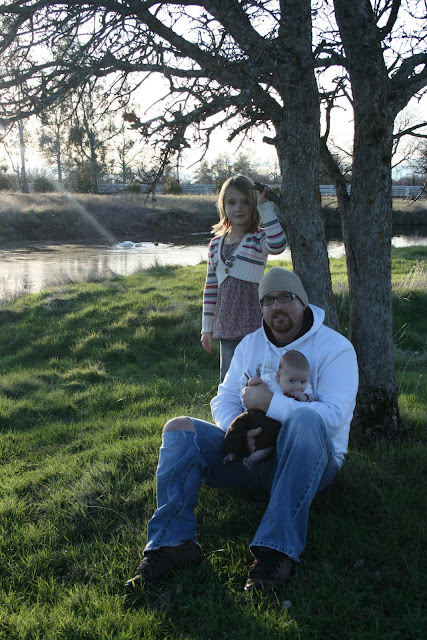 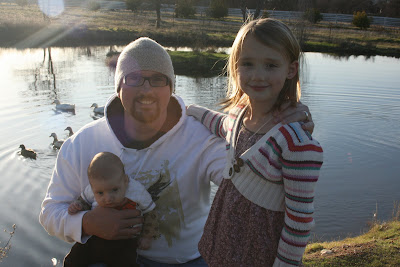 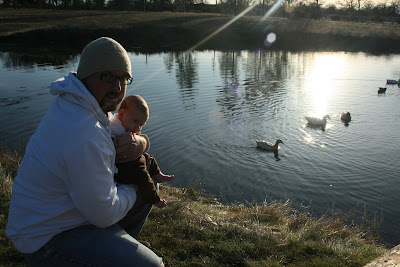 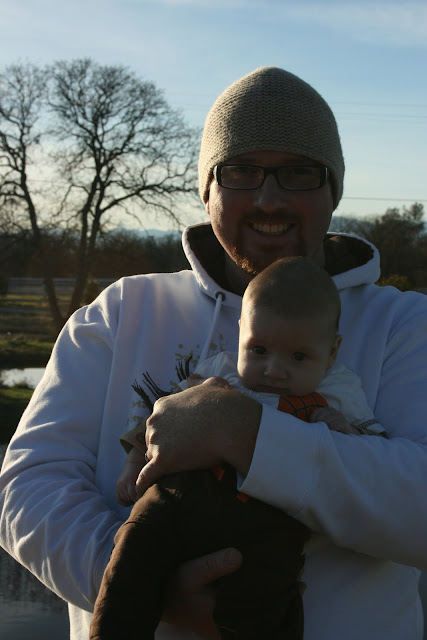 This boy has my heart. 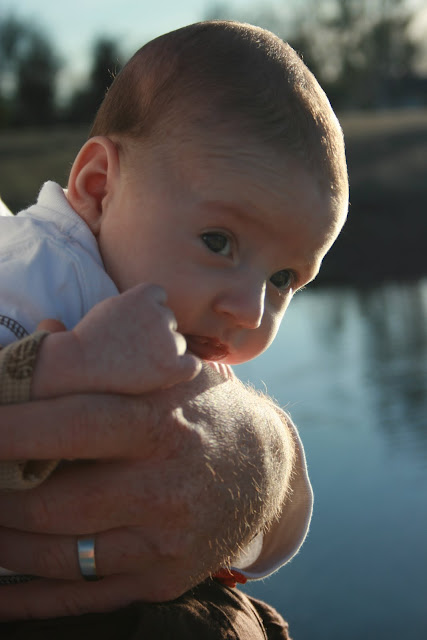 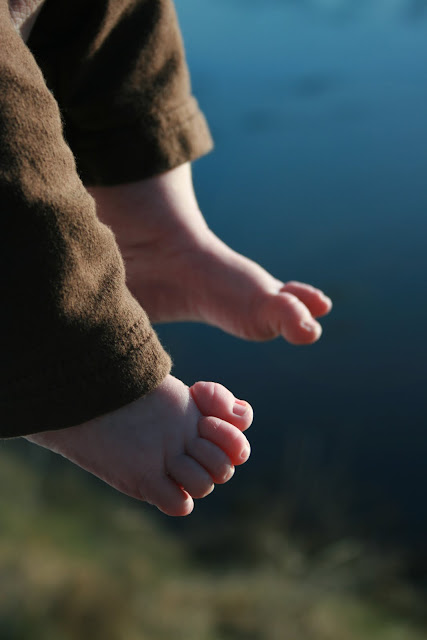 I love his tiny feet.

Yesterday was gorgeous so we walked out to our pond to take a few pictures.

Here are a few of my favorites: 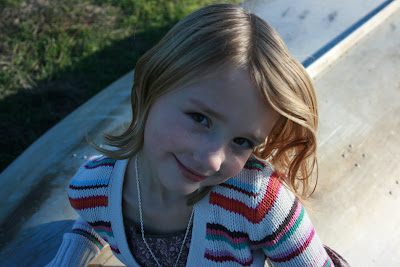 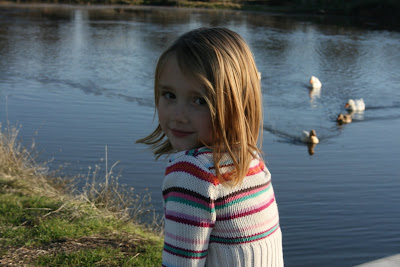 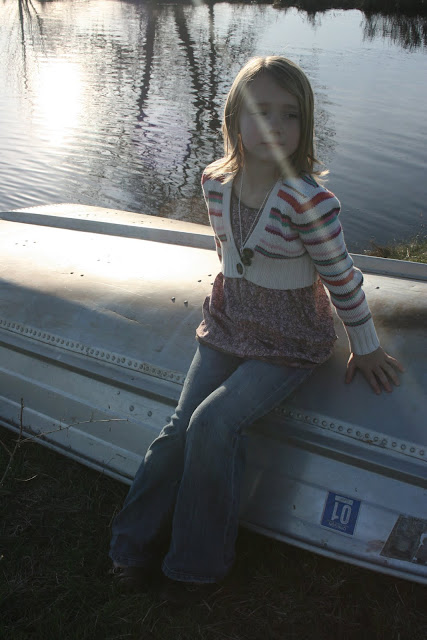 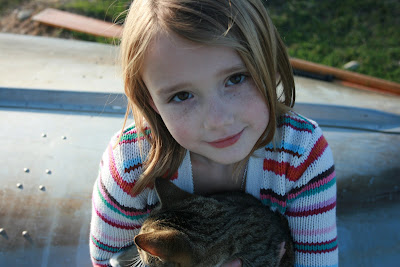 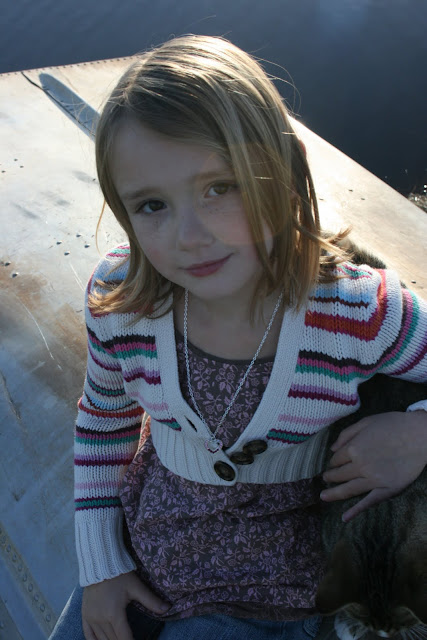 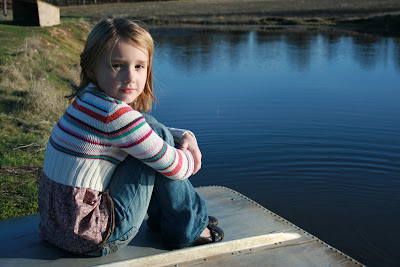 I love this girl! She loves the camera, which is great because I love to take pictures.

Travis and Brooklyn with Santa 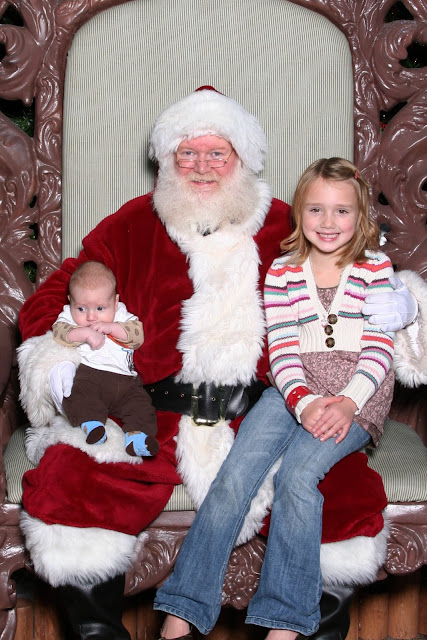 Last night was Brooklyn's school Christmas program and it was just me and the kids. Jon went to a concert with friends(a Christmas present), so I was left to fend for myself.

I, of course, underestimated the time it would take to get ready and ended up running out the door frazzled, thinking to myself "Am I dressed? Did I put on deodorant? Is the baby changed? Does the kid have underwear on? Where are my keys? Is the camera charged?" As you can see, it's pretty stressful and crazy in my brain.

We got to the theater and it took me awhile to wrestle the baby into the baby carrier which I was so thankful that I remembered, or truthfully, had left in the car from the last time I had used it. Then I slung the camera bag and diaper bag over my shoulder, grabbed the girls hand, locked the car and then weaved my way through the busy parking lot to get into the warm theater.

Once we got inside I went to our section and took pictures of all the kids in their holiday best, looking so adorable in ties and dresses. Brooklyn wore her white flower girl dress from my sisters wedding along with silver glittery shoes; it made her feel like a princess and it showed. Next year she said she wants to wear a red dress and the year after that, a green one. She decided that she would rotate the Christmas colors each year. I love her:)

When it was time for the first grade class to go up on stage I pulled out the video camera. Of course it is at that time that Travis decides to cry. So there I am, bouncing the screaming baby and trying to record my first born singing with her class. Every time I would look down at the baby to try to hush him I would look back up only to find that I was filming the floor. I will have to remember to hand out barf bags when we view the tape later.
Posted by Amy @ Increasingly Domestic at 12/09/2009 10:54:00 AM 1 comment:

Email ThisBlogThis!Share to TwitterShare to FacebookShare to Pinterest
Labels: Brooklyn, Holidays, Travis
Newer Posts Older Posts Home
Subscribe to: Posts (Atom)
The most important thing she’d learned over the years was that there was no way to be a perfect mother and a million ways to be a good one."
~Jill Churchill