I have been seeing this book on blogs everywhere lately and decided to check it out for myself. 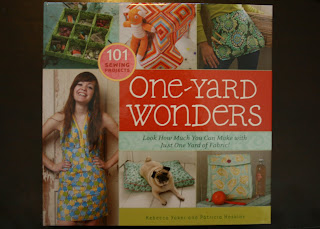 I flipped through it at Barnes and Noble and fell in love with all of the projects...loving that each one took only 1 yard of fabric.
Heck yes!
I bought it and went home, grabbed a cup of coffee and looked though the book page by page.
I decided that Granny's Clothespin Apron would be my first project from this book. 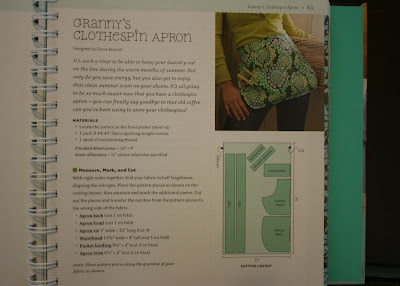 I sometimes hang my son's cloth diapers on the clothesline and hate having to reach down for more pins when I need them.
Enter this great pattern. Yay! Fun and functional...my kind of project!
I cut everything out and was doing just fine until I got to the binding part. I could not figure out what I was doing wrong! I read and re-read the directions and couldn't understand what the heck they were talking about. After about an hour of frustration I decided to just make it work and finished it.
I think it still turned out pretty great:) 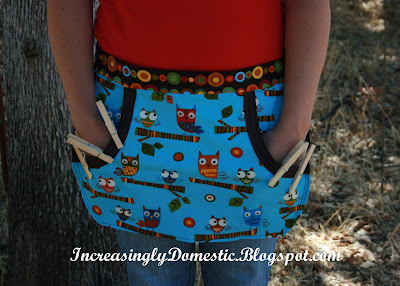 I adore owls and this fabric just makes me so very happy:)
Has anyone else made this apron?
Did you have the same problem that I did?
Linking up here:
Go check out other crafty people!!!

Email ThisBlogThis!Share to TwitterShare to FacebookShare to Pinterest
Labels: One Yard Wonders, Sewing

I am a soccer coach. I never intended to become a soccer coach...it just sort of happened.
I coached gymnastics for 7 years and LOVE working with kids; teaching them new things and seeing that "light bulb" moment when they finally get what you are saying. Bliss.
Soccer is one sport I never played growing up. Truth be told, it scared me to death!
My daughter plays soccer...she's pretty amazing.
She will run right up to the biggest boy on the other team and take the ball from him. Bam!
She will get tripped and jump right back up.
She will run until she's too tired and then will keep running.
I'm not saying she's perfect, but she puts her whole heart into what she is doing.
She tried gymnastics and didn't like it. She tried dance and wasn't a fan(she wanted to freestyle instead of following direction). Last spring we asked her if she wanted to try softball and she replied that she would rather play soccer.
To make sure that she got the same coach that she has had the last 2 seasons I signed up to be the assistant coach, thinking that I could just help out a little and make sure she had a coach who would teach her what she needed to know.
He signed up to teach our U-8 team as well as a U-10 team and has assistant coaches to help on each team. It started out that the plan was to have both teams practice together, but when we realized that they just have too many skill level differences we decided to split the teams up.
That makes me the main coach now for our team. Yikes!
Thankfully I have parents on our team who have actually played the game before to help me teach the kids. This book has also been very helpful: How to Coach a Soccer Team by Tony Carr.

Email ThisBlogThis!Share to TwitterShare to FacebookShare to Pinterest
Labels: Learning Something New, Soccer

Look what came in the mail!!!! 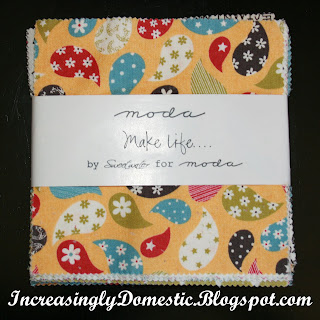 I won this in a giveaway by Kari at UCreate that was hosted by Char at Crap I've Made.
I was so excited to see my name posted as the winner...I rarely win these things. Yay!!!
This is a charm pack...5x5 perfect cuts of several fabrics. I LOVE how cute and perfect they are(and that I didn't have to cut them). Even the name is adorable...charm pack. I have no clue what they will become though, as I have never used a charm pack before.
Any thoughts?
What would you make out of these yummy little treats? 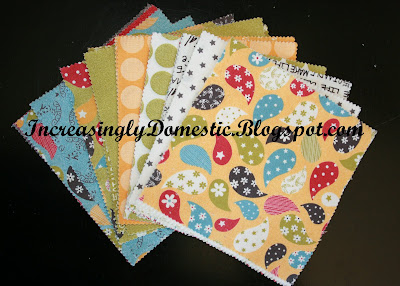 Email ThisBlogThis!Share to TwitterShare to FacebookShare to Pinterest
Labels: Fabric, Look what I won

I have been using Fuzzibunz One Size Pocket Diapers since my son was a month old and we still LOVE them..
At first I used disposable wipes because
A.)Someone gave me a HUGE box of them at my baby shower,
and B.)They were easy.
I was almost out of wipes when I came across a statistic that said that in your baby's lifetime of wearing diapers you would spend like 800 dollars on wipes(not sure if that is true, but I imagine that the real number is still pretty high).
I bought some double sided flannel wipes from Vanea at Sweet Baby Comforts. I started just wetting them with water, but couldn't help feeling like it just wasn't cleaning his bottom the way it should.
I searched for baby wipe solutions and there were quite a few, which surprised me...you just never know what's out there until you look I guess.
Anyway, this is the recipe that I use and I love it. I love how fresh and clean his tushie gets and I love that he smells fresh out of the bath all the time. YUM!
Nothing yummier than a freshly cleaned baby. 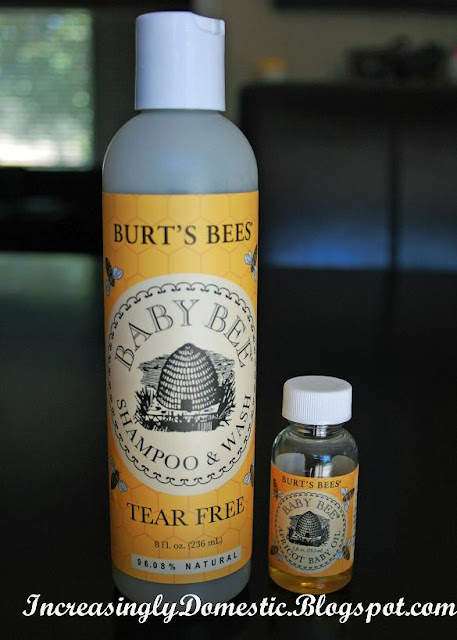 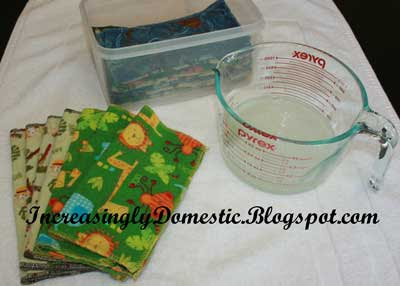 Mix the ingredients well to combine, dip your cloths into the solution and gently ring them out so that they are not dripping. Put them in an airtight container or in a wipes warmer for an added luxury for your baby.
Posted by Amy @ Increasingly Domestic at 8/22/2010 02:04:00 PM 3 comments:

I love sewing! Seriously.
I made three new skirts for Brooklyn over the past couple days.

I wanted to make some simple skirts before I tried my hand at the tumbler skirt by Char over at Crap I've Made...so cute and just a little scary. I feel confident now that I will be able to do it.


My first skirt ever was made by sewing up the fabric selvage to selvage, sewed an elastic casing and then sewed bias tape to the bottom to finish the skirt. It took me a long time because I am a freak about making sure my fabric is cut perfectly, my pins lined up just so, and my stitches are straight. Ha! You can't tell from the picture but there is brown bias tape along the bottom of the skirt. 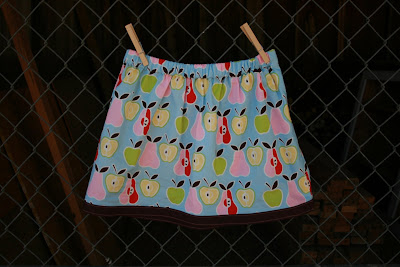 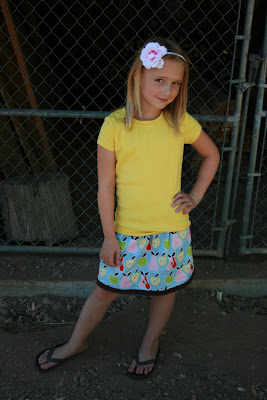 Brooklyn in the first skirt I have ever made! There will be many many more in the future.
For my second skirt I used this Peasant Skirt Tutorial. 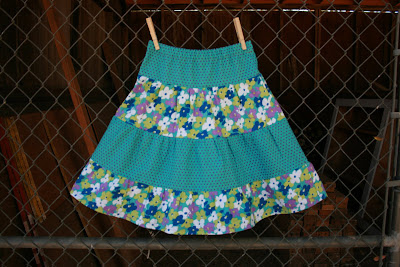 I like the way it turned out, but next time I will maybe add another layer
and add a few inches to each layer to make it more twirly. 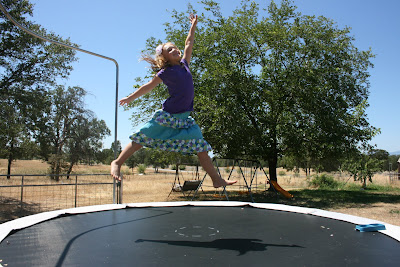 She loves it and that's what matters the most:)
I found some gorgeous owl fabric when I went to Joanne's yesterday and Brooklyn wanted another selvage skirt. Twist my arm, okay! I pretty much love making skirts. 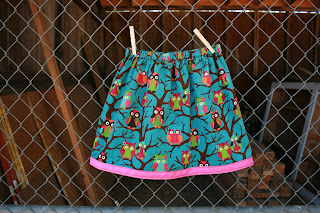 Don't you just LOVE these owls?
I am picturing this skirt with a sweater and a pair of leggings this fall. YUM! 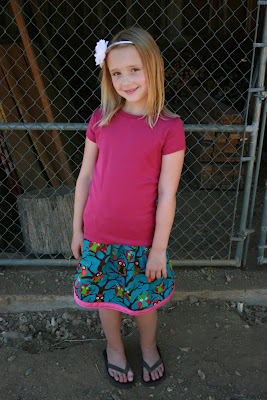 I have been dying to make one of these since I first saw it...a crayon roll. A birthday party invite for a 6 year old girl was the perfect excuse to get started. I have seen so many wonderful tutorials for crayon rolls out there, but my favorite is Cindy's of Skip to my Lou. She is pretty much brilliant.


Here are some pictures of my first crayon roll: 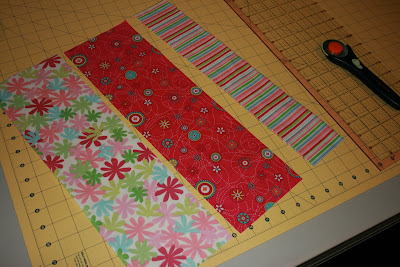 These are my fabrics. I love how fun they are together! 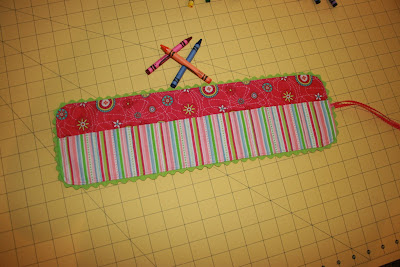 All finished and waiting for the crayons! 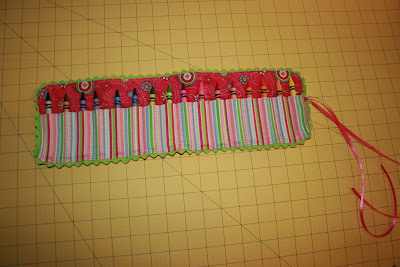 I love all the perfectly new crayons lined up so neatly.
**sigh** I want one of these for myself! 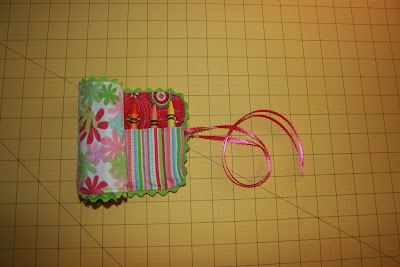 I love the ric rac and the ribbon! I have never used ric rac before and even with my perfectionist's side going a little OCD(okay, alot), I got through it and love the way it turned out. 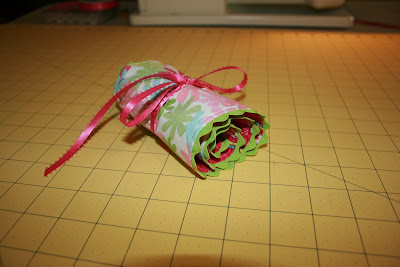 All rolled up and ready to go!
I will be making about a hundred more of these for sure. Pens, pencils, markers, crayons, make-up brushes, paint brushes.....Hmmmmm, what else can I alter this for?
Posted by Amy @ Increasingly Domestic at 8/07/2010 11:11:00 PM 1 comment:

A school bag for Brooklyn

I finished my very first bag yesterday! It is a messenger bag for Brooklyn to use for school this year. She loves the over the shoulder bags so when I found the tutorial for the basic messenger bag on Larissa's blog Mmmcrafts , I knew I had to make it.

I bought all my supplies and then got to cutting out my pattern pieces. Once I had them all layed out I had a moment of perfectionistic panic.

What if this turns out to be a total train wreck and I am labeled a failure forever?!?!?

Take a deep breath Amy, you will never know until you try.

I made a pot of coffee, turned on some Hulu and got to work. It took me three days to make the bag because of having to stop to take care of the darn kids play lovingly with my children, but I got it done!


The part that took the longest was doing the applique on the front flap. Brooklyn and I decided to flip the flap so that the lining was on the outside and I am thrilled with the way that it turned out. My stitching is a little wonky on the letter, but the stitching around the heart is my favorite. 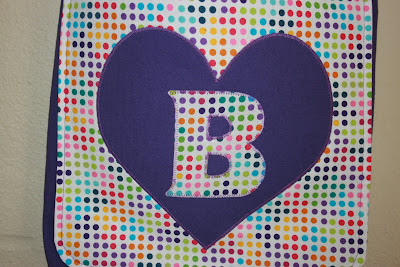 The tutorial was so easy to follow and I will definitely make this bag again and again. Thanks Larissa for a great tutorial that even a newbie like me can follow!!! 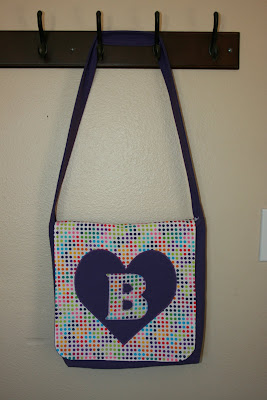 Here is the front 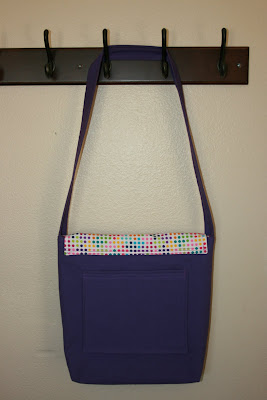 This is what the back looks like...Love the pocket, but next time I will make sure to put the opening for turning on the bottom. Grrrrr! Let it GO Amy. 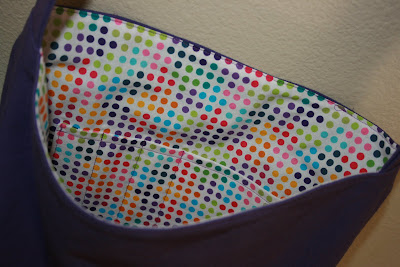 This is the inside lining with three small pencil pockets and one larger pocket for um, hand sanitizer?
I will most likely be adding a D ring to the strap to make it adjustable because I made the strap a little too long. Also, the next time I make one of these I will be using a heavier fabric or adding a thicker interfacing to give the bag more structure.
I  am making a matching pencil case and tissue case to go inside her bag and have already collected some Smencils and note cards and a notebook to put inside as a surprise. :)
Posted by Amy @ Increasingly Domestic at 8/05/2010 12:22:00 PM 9 comments:

Last weekend my sister and brother came to visit us. My sister has wavy/curly hair and Brooklyn was in love with it. She asked her how she got her hair to be curly(Brooklyn's hair is straight) and Trisha told her that she just put mousse in it and scrunched it to get it that way.

Today Brooklyn came up to me and told me that she had curly hair like Trisha because she "made it look like a Moose". She twisted it and pinned it to the top of her head and ran around saying "I look like a Moose! and now my hair is going to be curly like Aunt Trisha!!!!"

Email ThisBlogThis!Share to TwitterShare to FacebookShare to Pinterest
Newer Posts Older Posts Home
Subscribe to: Posts (Atom)
The most important thing she’d learned over the years was that there was no way to be a perfect mother and a million ways to be a good one."
~Jill Churchill