These are the Valentines that Brooklyn gave out to her classmates on Friday: 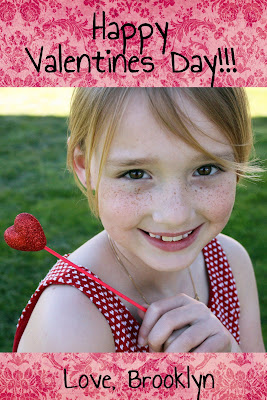 Did I mention that I did this whole thing on Thursday after school? Yep. I am a procrastinator to the core. For weeks I have been seeing everyone's Valentines and kept thinking "Oh that's so far away" and then Thursday I went "Oh CRAP! The party is tomorrow!!!"
I jumped into frantic freak mom mode and thankfully we got 'em done. Whew!
Here's what we did:
First we had a little photo shoot outside, where we literally ran around the yard finding the best light. We were running because the boy was left to his own devices inside the house and I was terrified of what mischief I would walk into if we were outside too long.
The heart stick is from the Dollar Tree and was snagged out of a vase on our way out the door to use as a prop.
Then we went through the photos and Brooklyn told me which ones were her favorite. It didn't matter though because I chose my favorite.
I'm the mom, so I win.
Then using Photoshop Elements I added a digital paper from Summertime Designs 14 Days of Valentine's Kit and added the text. The only editing I did to the photo itself was lighten it up a bit as the prints usually come out darker than they appear on my computer screen(figured that one out the hard way for last years Valentines).
It is by no means professional looking as my Photoshop design skills are severely lacking, but it's still cute. Right? ;)
I had them printed at Costco and picked them up an hour later for just a few dollars!
I got home and put Brooklyn to work stuffing a photo and a sucker into baggies to hand out to friends and teachers while I made the treat for her class party.
Everyone at school thinks that I have it all together...boy do I have them fooled!