Last Wednesday after picking Brooklyn up from school we came home to find a dirty old Basset Hound in our yard. He looked so tired and he walked over to a tree and plopped down in the shade. I made Brook stay inside while I went to see if he was alright and if he had tags. No tags, but he was such a sweetheart that I just knew he was a lost pet.

Jon put him in the truck for me and Brooklyn and I drove door to door to find his home. It was mid afternoon on a weekday, so most homes were empty. I came home and we fed him and made him a place to sleep. He was so smelly that Jon gave him a bath, but that didn't seem to help much. I hear these dogs are just smelly. We didn't know what to call him and so Jon and I were calling him "Stinky Pete". Brooklyn got so mad at us....she said "That is an awful name! Call him "Sweety"!"

Jon suggested that we make a poster, so I whipped one up and he went and posted them around our neighborhood.

Saturday morning while we were at Brooklyn's soccer game(she won!), I got a call from a neighbor who saw our poster as well as an add in the paper about a lost dog that matched the description. She called the guy and gave him our numbers and she gave us his number. I called him when we got home and we confirmed that it was Bud, his lost dog.

When the guy showed up to pick up his dog Jon recognized him and his wife. They were his friend Joe's parents! So random. So now if Bud shows up here again I know where he lives. 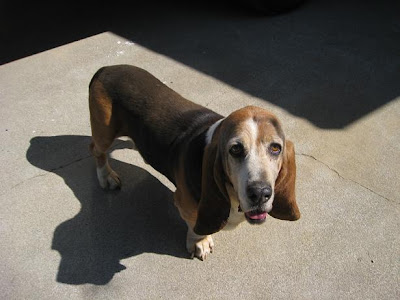 Email ThisBlogThis!Share to TwitterShare to FacebookShare to Pinterest
Labels: Pictures, So Random

He may be smelly but he sure is cute!