9 months and a sunburn

Today Travis is nine months old. This morning we had his check up with the Dr and found out that he has dropped from the 10th percentile of weight to the 3rd. Yikes! I knew he was little, but really? He weighs 15.1 pounds. They weighed him twice just to make sure. So now I have to add a scoop of formula to his meals for extra calories. We have an appointment in one month to see how he is doing...she wants him to have gained 2 pounds by then. Other than that he is a strong, healthy and active little boy! Now I just have to fatten him up a bit:)
After his appointment I met some friends at the lake for some mommy/kid fun time. There is so much crap you have to take with you when you take kids to the lake. I pretty much take everything I can ever imagine needing because on the rare occasion that I did not pack a certain thing it was the one thing that was needed. I think a wagon would be a handy thing to have for the next time I do this so that Brooklyn can pull all the stuff in it while I push the boy in the stroller. 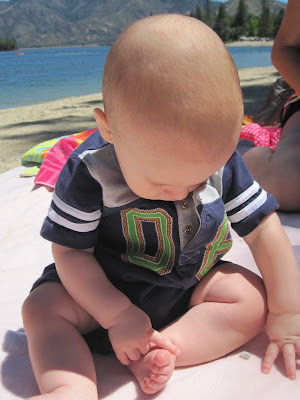 Now I am sunburned and exhausted...it was worth it. The kids had a blast. Travis ate dirt and put every rock he could get his grubby little hands on into his mouth, and Brooklyn swam and made sand castles with friends while I talked with my mommy friends. 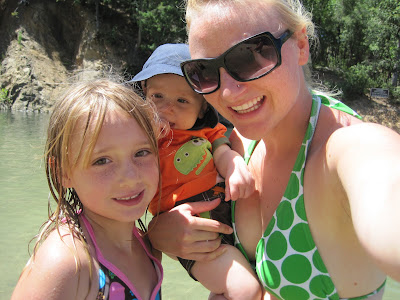