I didn't think it would happen this soon 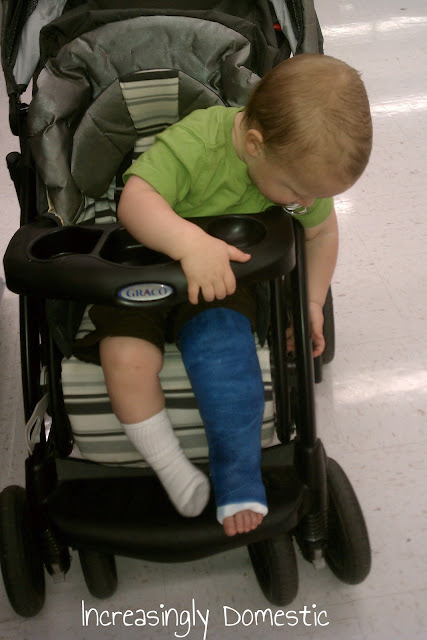 It's been a crazy week!
Last Saturday Brooklyn had her last soccer game, then the end of season soccer party. After that the kids and I went to a dear friends baby shower. It was a long day and I was so tired when we finally got home. I sat down on the couch with my laptop to upload the pictures from the day while the kids watched TV.
Travis climbed onto the coffee table and was dancing when his right leg slipped off the edge of the table causing him to drop onto his shin on the edge of the coffee table and then fall to the ground. It happened so fast! He grabbed his left leg and started screaming in pain, so I scooped him up and rocked him hoping and praying that he would push away from me at any moment and run off to climb more furniture.
No such luck...He screamed any time I tried to put him down.
I called my husband who had just gotten to a friends house for a BBQ and told him what happened and that I was heading to the ER. He met us there, but thought that I was overreacting until he held Travis and saw how he was acting. After about an hour we went in for x-rays and the technician said he didn't see anything and that maybe it was just a bad bruise. He took another film and had to hold Travis's leg pretty firmly to get him to hold still and said "I don't see how this could be broken with the way he is fighting." We went back into the waiting room and after awhile I told Jon he could go back to the BBQ. No point in both of us having no fun, right? Especially if it just ended up being a bad bruise.
While we were waiting, Brooklyn started crying and was holding her left leg. She was in real pain. At first I was mad, thinking that she was being a drama queen, but then I realized what was going on. Sympathy pain. I explained to her that she loved her little brother so much that she was feeling his pain. After that she smiled and started to feel better.
After almost 5 hours in the ER we got called into the Triage area and I was told that he broke his leg. Both bones. Tibia and Fibula...non displaced buckle fracture. I was in shock. My 19 month old son had just broken his leg. The Ortho Tech said that he was glad that I was still there. Seriously? What kind of parent would leave? I told him that I would have sat out there all night if need be.
There were no rooms available for quite awhile and he wanted to get us out of there as soon as possible so he asked if I minded him splinting the leg in the Triage walkway. I quickly agreed and sat in a chair with Travis on my lap while the Ortho Tech put the splint on, then they gave me the discharge papers and we were out!
I called Jon on the way home and asked him to get Travis some Ibuprofen for the pain. Travis and Brooklyn slept in bed with me while Jon slept on the couch and neither Jon or I got much sleep. I kept getting kicked in the face and was so freaked out about hurting his leg. It was pretty stressful. 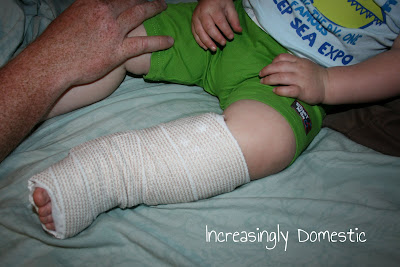 Here is the splint on the first night.
Sunday I was so tired and was so sad for my sweet little boy with a broken leg. I was feeling like the worst mom in the world. He kept pointing at the splint and saying "Want out? Please? Want out?" Ugh. Broken heart. I put him down for a nap and sobbed on the couch with a cup of coffee. Full on Ugly Cry. I was so tired and overwhelmed. A 2 1/2 hour conversation with my sister and a plethora of supportive comments and messages on Facebook helped me to come back to reality.
Monday morning I called the Orthopedic doctor they had referred me to and got an appointment for Thursday afternoon. I guess there had been many breaks over the weekend and since his breaks were non-displaced he wasn't a priority. I got that. No big deal.
On Monday night, exactly 48 hours after he broke his leg I look over at him standing up against the highchair, just in time to see the splint slide down his leg and hang at his ankle right bellow the break. I tried to slip it off the rest of the way, but he kept fighting me so I called Jon to come home and help me take the splint off. I left Brooklyn at home with Jon while Travis and I headed back to the ER to get a new splint.
This time we were out in 2 hours with a splint that went up over his knee. It took me, the Ortho Tech and 2 nurses to hold Travis still enough to get it on him. Even then it was not the prettiest splint to look at;) My boy is a fighter for sure! I love his strength and endurance...attributes that will serve him well in life. 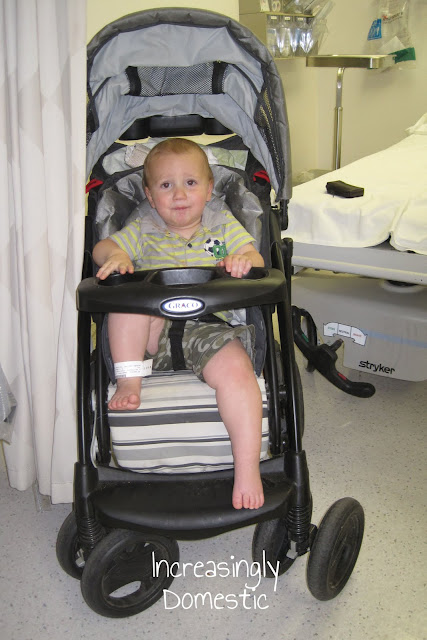 Before the battle of the second splint. 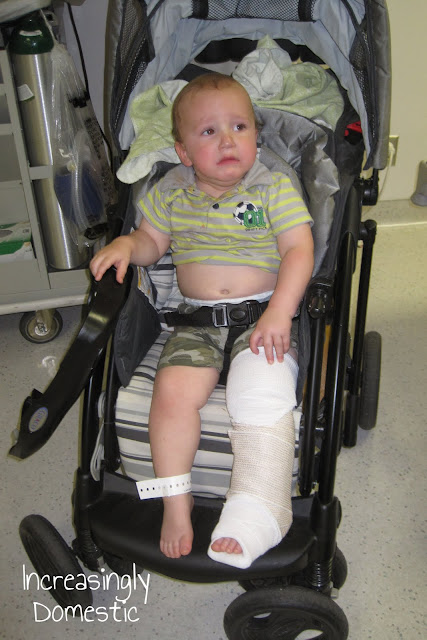 And After. My poor baby:( 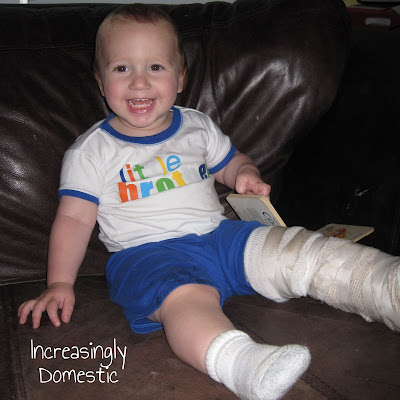 My sweet happy boy:)
Thursday we had our cast appointment and the Dr looked at the x-rays and said "Yeah, so he definitely broke his leg!" I haven't seen them, but the way everyone keeps talking it must be quite obvious. I think I may need to see these;) Maybe frame them on his wall or put them in his scrapbook(Ha! Like I have time to scrapbook).
To get the cast on him they had me sit on the bed with Travis on my lap and then it took two of them to get his leg wrapped. He screamed so loud and so long that everyone was giving us the sad look when we walked out of there.

My 19 month old son in his first cast.
Travis is adjusting just fine and gets around with no problems. I almost wish he couldn't, but there is no holding this boy of mine back;)
We go back in 3 weeks to check his leg for growth to see if we need to put a new cast on.
I had a feeling I would be dealing with this with Travis...I just didn't think it would happen this soon.

Oh, Amy. I am so sorry. Luckily those little ones get over things much faster than their mamas. You are a wonderful mom- accidents happen, but that doesn't make them any easier. :( Hope everything heals quickly.
xoxo,
Amy

I'm so sorry for what you've had to deal with this week! It's amazing how quickly these things happen and there's nothing we as parents can do to prevent it. My daughter split her head open at a fast food play-yard a month ago requiring a couple staples and it scared the you know what out of me!! I didn't see it happen and felt like the worst mother in the world because I couldn't say how it happened. Of course, I had to realize there was nothing I could have done. I always expected my son to be the one we hauled to the ER!!!

Hopefully the next several weeks will go smoothly and this will soon be just a memory. Hugs to you girlfriend!!!!

Poor guy and POOR MOM!!! He looks pretty proud of it though in the 2nd to last picture. :)

Amy, you are such an incredible mom. Your love for your kids is beautiful. I am so sorry you have had to face this already with Travis, I can't imagine how hard it would be to see your baby in pain like that. Travis has such a strong spirit, I love that he is a fighter:)

Oh my goodness, what a week for you all! This could so easily have been about my twin boys, they are 2 yrs old, and think they are invincible!

Travis sounds like a real fighter, I'm sure he will love telling this story to friends when he is older!

Oh, I feel your pain. My son broke his arm on 1-1-11. What a way to bring in the new year. So sorry your little man has to go through it. Casts are no fun. The good news is that kids heal up real nice and most of the time after the bone is healed the doctors can't even tell it was broke. I learned this going through our ordeal. Anyway, hope things get better soon.

Oh Amy! I'm so sorry! They always recover quicker then us mommies do! Don't beat yourself up, you are a fantastic mom! Hugs.

Life, Crafts and Whatever said...

How scary, momma! But I think moms get more upset and stressed about these things than the little ones do. They're tough. Here's hoping he's comfortable, what a trooper!

oh ouch. poor thing. poor mommy too. i'd be freaking out.

Poor baby! He sounds like Breyden! that boy climbs everything, nothing deters him...he can bust his eye and go right back to doing exactly what he was just doing! I hope he feels better soon, and you too! It's not your fault! Things like this just happen with kids...but I probably would have sat on the couch and cried too!

Oh my goodness, what a weekend! I live in fear of the climbing stage... my late walker and timid boy hasn't worked up the courage yet. Bumps and breaks are REALLY what little boys are made of, I think :)

Amy!!! I feel so bad for you. I can just picture myself having the same full on cry over the whole situation. These things happen, and there's nothing you could have done to prevent it. Hang in there! I have to say, though, I love the blue cast... He looks tough:)